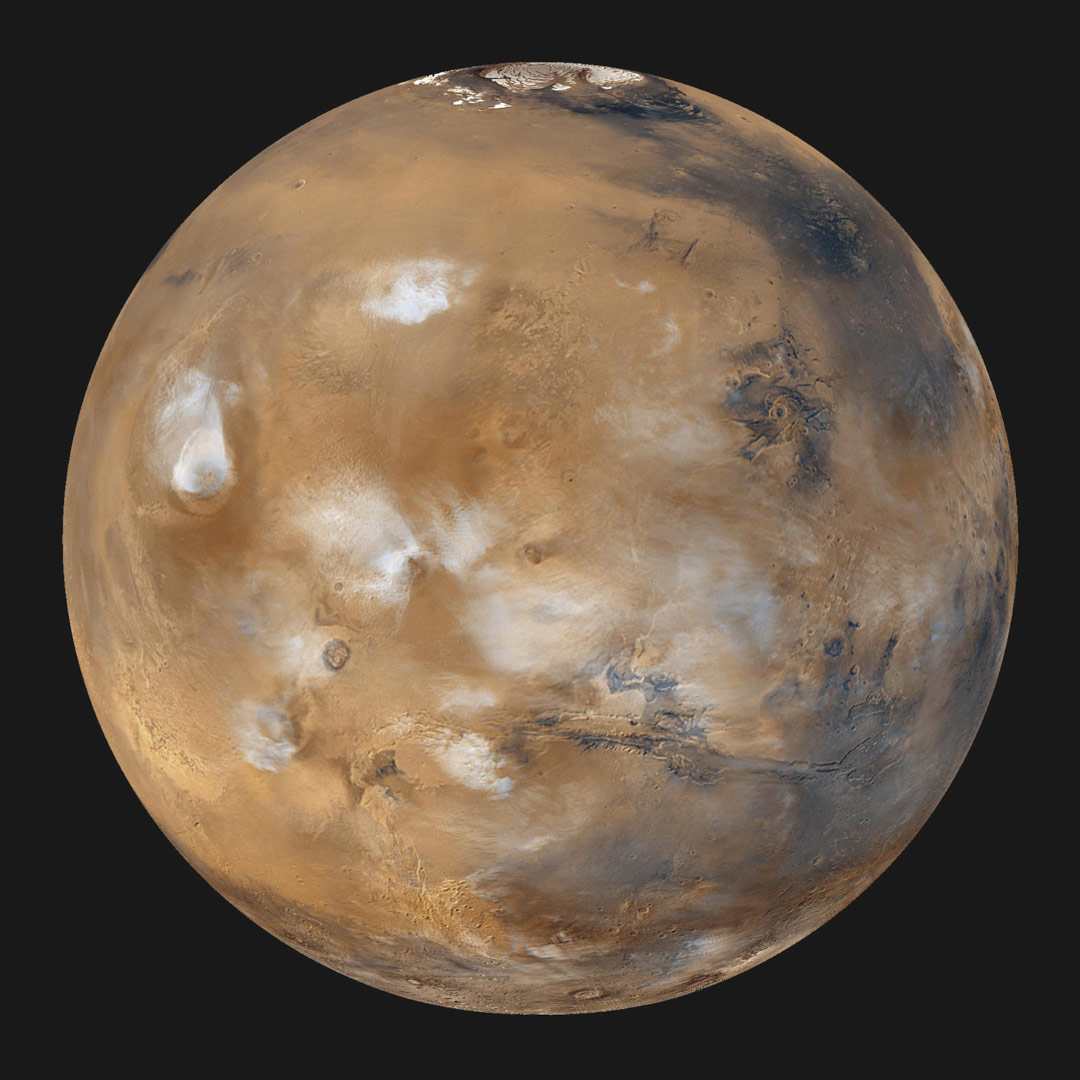 This press release was originally published on the York University News site.

TORONTO, July 29, 2021 – For years scientists have been debating what might lay under the Martian planet’s south polar cap after bright radar reflections were discovered and initially attributed to water. But now, a new study published in Geophysical Research Letters today, led by planetary scientists from Lassonde School of Engineering at York University, puts that theory to rest and demonstrates for the first time that another material is most likely the answer.

Research led by Isaac Smith, Canada Research Chair and assistant professor of Earth and Space Science at Lassonde School of Engineering and research scientist at the Planetary Science Institute, uses multiple lines of evidence to show that smectites, a common type of clay, can explain all of the observations, putting the Mars lake theory on ice.

“Since being first reported as bodies of water, the scientific community has shown skepticism about the lake hypothesis and recent publications questioned if it was even possible to have liquid water,” said Smith. Papers in 2018 and 2021 demonstrated that the amount of salt and heat required to thaw ice at the bottom of the polar cap was much more than Mars provides, and recent evidence showing these radar detections are much more widespread — to places even harder to thaw ice — put the idea further into question.

The research team, which includes researchers from the University of Arizona, Cornell, Purdue and Tulane universities, used experimental and modelling work to demonstrate that smectites can better explain the radar observations made by the MARSIS instrument aboard the European Space Agency’s Mars Express orbiter. Further, they found spectral evidence that smectites are present at the edges of the south polar cap.

“Smectites are very abundant on Mars, covering about half the planet, especially in the Southern Hemisphere,” said Smith. “That knowledge, along with the radar properties of smectites at cryogenic temperatures, points to them being the most likely explanation to the riddle.”
Experiments done at York University measured the radar characteristics of hydrated smectites at room temperature and cryogenic temperatures. The radar characteristics in question are two numbers that represent the real and imaginary parts of the dielectric constant. Both numbers are important for fully characterizing a material, but the 2018 study used modelling that included only the real part of the dielectric value, leaving out certain classes of materials from being considered — namely clays.

Once the experimental measurements were completed, data was evaluated using code. It was in these simulations researchers found that frozen clays have numbers big enough to make the reflections.

Smectites are a class of clay that is formed when basalt (the volcanic rock that comprises most of Mars’ surface) breaks down chemically in the presence of liquid water.

“Detecting possible clay minerals in and below the south polar ice cap is important because it tells us that the ice includes sediments that have interacted with water sometime in the past, either in the ice cap or before the ice was there,” said Briony Horgan, co-author and associate professor in Earth, Atmospheric, and Planetary Sciences at Purdue University. “So, while our work shows that there may not be liquid water and an associated habitable environment for life under the cap today, it does tell us about water that existed in this area in the past.”

To support this new hypothesis, Smith conducted experiments in his lab with equipment designed for measuring dielectric values. To simulate the conditions beneath Mars’s south polar cap as best as possible, his team froze the clays to -50 C and measured them again, something that had never been done before. Smith adds that the infrared absorptions attributable to these minerals are present in south polar orbital visible-near infrared reflectance spectra. Because these minerals are both present at the south pole and can cause the reflections, the team believes this to be a more viable scenario than the presence of liquid water. No salt or heat is required.

“We used our lab measurements of clay minerals as the input for a radar reflection model and found that the results of the model matched very well with the real, observed data,” said Dan Lalich, post-doctoral researcher at the Cornell Center for Astrophysics and Planetary Science at Cornell University and second author on the study. “While it’s disappointing that liquid water might not actually be present below the ice today, this is still a cool observation that might help us learn more about conditions on ancient Mars.”

“We analyzed the MARSIS radar data and identified observations with high-power values at the base of the south polar layered deposits, both in the proposed lake region and elsewhere,” said Jenny Whitten, co-author and planetary scientist in the Department of Earth and Environmental Sciences at Tulane University.

“The first reason the bright reflectors cannot be water is because some of them continue from underground onto the surface. If that is the case, then we should see springs, which we don’t,” said Stefano Nerozzi, post-doctoral fellow in the Lunar and Planetary Laboratory and Department of Geosciences at the University of Arizona and co-author. “Not only that, but multiple reflectors are stacked on top of each other, and some are even found right in the middle of the polar cap. If this were water, this would be physically impossible.”

Putting the results in perspective Smith says the answer is clear.

“Now, we have the trifecta. One, we measured dielectric properties of materials that are known to exist on over 50 per cent of Mars’ surface and found them to have very high values. Two, we modelled how those numbers would respond in Mars’ south-polar conditions and found them to match the radar observations well. Three, we demonstrated that these minerals are at the south pole. Because the liquid water theory required incredible amounts of heat which is six-to-eight times more than Mars provides, and more salt than Mars has, it was already implausible. Now, the clays can explain the observations with absolutely no qualifiers or asterisks.”